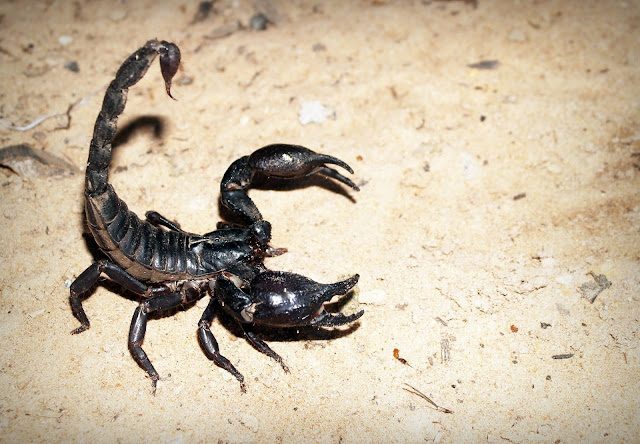 The scorpion is an arthropod invertebrate animal (with legs formed by several segments) that belongs to the order Scorpiones and is in the class of arachnids.

Scorpiones is the order of terrestrial arthropods that gathers about 2.000 species of scorpions with length from 10cm to 12cm, elongated body and chelicera with three artículos. They are generally discrete and nocturnal animals, hiding during the day under tree trunks and barks.

The name scorpion is derived from the Latin scorpio/scorpionis. Lacrau comes from the Arabic al-'aqrab.
There are scientific records of the existence of scorpions over 400 million years ago. According to research, they were the first arthropods to conquer the Earth's environment. In this adaptation, the chitin shell that makes up their exoskeleton and prevents excessive evaporation was very useful to them.
Currently, there are about 1600 species and subspecies distributed in 116 different genera all over the world. In Brazil there are about 160 species.
There are scorpions in all continents except Antarctica. We find species in the Swiss Alps and Europe in general, in Mexico, the United States and Canada, in South America in general, among rubbish and rubble from small and big cities, in the Amazon Forest (Brazil), in Oceania, in the northern Mediterranean, in the Middle East, in India, in northern and southern Africa and Asia. Its colours range from straw yellow to total black, passing through intermediate shades, such as reddish yellow, brownish red and shades of green or even blue.

The different scorpion species have very different lifetimes and the real life time of most species is not known. The range of life seems to be between 4 and 25 years, with 25 years being the maximum recorded life span for the species H. arizonensis.
They prefer to live in areas with a temperature between 20°C and 37°C but survive at temperatures between 0°C and 56°C. Perfectly adapted to desert weather conditions, they can withstand a daily temperature range of about 40°C. Scorpiops, some of the bothriurid family living in Patagonia and small central European Euscorpius can survive winter temperatures as low as -25°C (-13°F). In Repetek (Turkmenistan) seven scorpion species (of which Pectinibuthus birulai is endemic) live at temperatures ranging from -31ºC to 51ºC.
They are carnivorous animals and generally have a habit of going out at night when they hunt and breed. They detect their prey by vibrations in the air, on the ground and chemical signals, all detected by those distributed mainly on their claws and paws. Their diet is based mainly on insects and spiders, but they can feed on other scorpions (cannibalism is a common practice among all arachnids), lizards and even small rodents and birds. Scorpions can eat huge amounts of food, but they can survive on 10% of the food they need, and can go up to a year without eating and consuming very little water, almost nothing during their whole life.
They normally use their poison to immobilise their prey, but it also serves to pre-digest the animal's internal organs and viscera. They then use their chelicera (a small pair of "prey" on the frontal part of the prosoma) to dilacerate their food while the digestive juices from the intestine are regurgitated to make an external digestion, which is then sucked in liquid form. Any indigestible solid matter (hair, exoskeleton, etc.) is trapped by bristles in the preoral cavity, which is ejected by the scorpion. In other words, just like spiders, they cannot ingest solid material.
The scorpion's natural predators are birds, some reptiles (snakes and some lizards), some spiders, ants, among others. In nature, size is essential to determine who is prey or predator.

The reproduction of the vast majority of species is sexed, requiring the intervention of males and females. However, some species have monoic reproduction (also called parthenogenesis), i.e. it does not require the presence of males. In this process, unfertilized ova give rise to live embryos. In sex reproduction, as in other species, there is a nuptial dance that precedes mating. The male cleans the floor with his combs and deposits there a capsule containing spermatozoa. He then drags the female over the spermatozoa in order to receive them.
There are species of scorpions which are viviparous (they develop inside the female body in a placenta), but most are ovoviviparous (they develop in an egg inside the female body, which hatch internally). They can spawn from 6 to 90 young and the gestation time varies with the temperature, species and feeding of the mother, and can be between 2 months and 2 years. The puppies are born completely white and by birth, through a genital cleft. They stay glued to the maternal back for about 10 to 14 days until the first seedling is completed (the younger the scorpion, the more seedlings it will make) until they can obtain their own food by themselves. Adult age is reached with about one year of life.

The body of scorpions is divided into prosoma and opistosoma, which is divided into mesosoma and metassoma.
Arthropods have an external skeleton (an exoskeleton), a hard, chitinous structure, which covers their body, without antennas, with four pairs of thoracic legs and a pair of palpos. They breathe through philotracheas, foliar lungs, like pages of a book.
Some species reach dimensions of 30 cm and even catch small vertebrates (lizards, frogs and rodents).
Scorpions differ from other arachnids in that they have long palpies and a long and dangerous tail. The palpies act as large, powerful clamps that can be used to hold and dominate their prey. Scorpions can also have more eyes than other arachnids, some species having up to six pairs, although this is not common.
The division of the tagmas into Scorpiones differs from most other arachnids by presenting prosoma, mesosoma and metassoma. The opisome is very segmented, with up to twelve segments. The opisome is divided into mesosoma, with seven segments, and metasoma, a portion formed by the five posterior segments. These constitute the tail, together with the telson, the last segment. The tail ends like a sting and it is through this sting that the scorpion inoculates its venom. In the prossoma are located the two median eyes, on the eye hill, and the lateral eyes, on each side of the carapace. Some scorpions can glow when exposed to ultraviolet (UV) light, acquiring an effluorescent green colour, as their exoskeleton is photosensitive. The exoskeleton of a scorpion is very sensitive to ultraviolet radiation.

The sting of the scorpion (called telson), besides serving to grab the prey, to defend itself, and in mating, inoculates in the prey a poison. This poison contains a number of substances whose chemical composition is not well defined, but contains neurotoxins, histamines, serotonin, enzymes, enzyme inhibitors, and others. According to researchers, neurotoxins appear to act on the nerve cells of the prey with a certain specificity depending on the type of animal.
It is interesting to know that the toxicity of a scorpion venom can be compared to the size of its pedipalps (the equivalent of the human arm of the scorpion); the more robust the pedipalps, the less the scorpion uses the venom for its prey and the smaller they are, the more scorpion venom can be lethal to its prey.
Scorpion venom of the Tityus serrulatus type, which appears to be the most toxic venom of all scorpions in South America, acts on the peripheral nervous system of humans, causing pain, punctures, increasing heartbeat and lowering body temperature. These symptoms, due to its body weight, are more pronounced in children, and due to physical conditions, in the elderly. All scorpions are poisonous, but only 25 species can be deadly to humans. Their sting is similar in degree to the toxicity of a bee sting.
The treatment consists of the local application of an anesthetic (2% lidocaine) and anti-bacterial serum (obtained from live scorpions). Treatment should be hospital based, preferably with the presentation of the scorpion to facilitate diagnosis and treatment.
Labels: eng_uk