Jellyfish: What is it, characteristics, curiosities 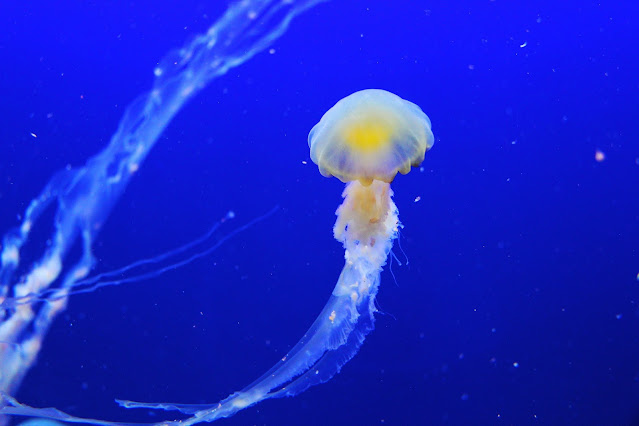 The jellyfish is a marine, invertebrate animal belonging to the phylum cnidarians. The body of an adult jellyfish is composed of a bell-shaped gelatinous substance that surrounds its internal structure, from which the various tentacles emerge.

Jellyfish are one of the most intriguing creatures in the animal kingdom, have many different shapes and colors, and vary in size. They usually measure from a few millimeters to up to 3 meters in diameter.

One species of jellyfish found in the cold Arctic Sea is enormous, its body can be more than 2.5 meters wide and its tentacles can be an incredible 36 meters long.

Although jellyfish are often transparent or pale blue in color, they can also be yellow, deep blue, bright purple, lilac, bright orange, and dark red.

Some jellyfish, when disturbed at night, are capable of producing light by bioluminescence.

Jellyfish are made up of a layer of epidermis, gastrodermis, and a thick gelatinous layer called mesogleia that separates the epidermis from the gastrodermis.

If you have never been stung by a jellyfish, then you are very lucky, as they have a painful sting and some can even kill.

The tentacles of a jellyfish are covered with stinging cells called cnidocytes. They release an urticating substance that can scare off predators and paralyze their prey. 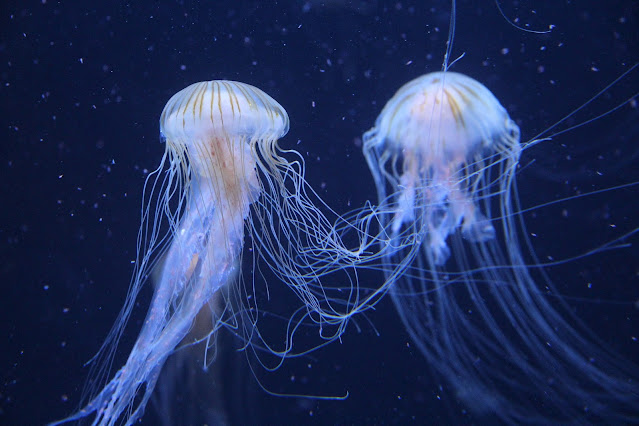 They are free-swimming, soft-swimming invertebrate aquatic animals that resemble a parasol and/or have the shape of a jelly bell, which also has some tentacles.

Jellyfish are classified in the subphylum Medusozoa, which is an important part of the phylum Cnidaria (coelenterates) to which also belong corals, Portuguese caravel, sea anemones, sea wasp, sea pens, and the gorgonian. .

It is worth noting that not all species in the Medusozoa group are considered jellyfish. Jellyfish are not invertebrate fish, and in some public aquariums they are often called jellyfish.

All jellyfish share several basic characteristics. As invertebrates they do not have a backbone.

Their body has two layers of tissue: an outer ectoderm and an inner endoderm. In between these layers is the gelatinous mesogleia that provides bulk and support for the animal.

The mesogleia contains no cells and is composed mainly of water, this being the main reason why they are transparent and give this animal a gelatinous appearance.

The body of the jellyfish during most of its life cycle is bell-shaped. In the case of jellyfish of the class cubozoa it has four different sides. Extending from the body of most jellyfish are long tentacles with nematocysts.

Jellyfish also lack a head, a circulatory system, and organs for respiration and excretion. Its mouth is on the underside of the body and is connected to a central cavity filled with hair-like structures called cilia that help transport food and other materials throughout the body.

Its lower muscles contract and expand the body, like an umbrella, allowing the animal to swim. A network of nerves runs under the body's fur and coordinates the muscles.

Some true jellyfish of the class Cypozoans have simple eyes around the edge of the body. In the case of the cubozoans these eyes are more complex and include lenses, corneas, and retinas. 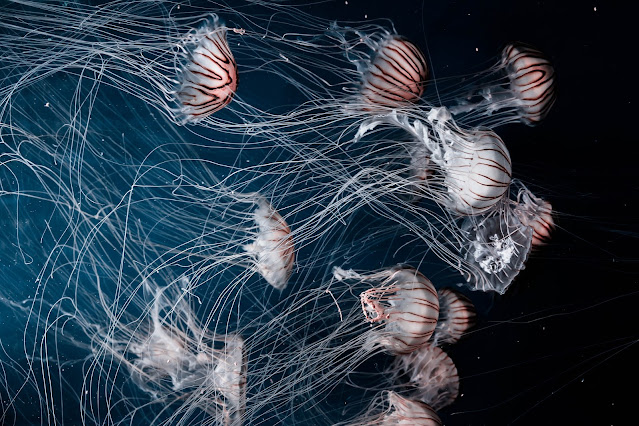 Jellyfish are inhabitants of tropical seas and the cold waters of the Arctic, where they have been for over 650 million years.

They are pelagic animals, that is, they live in the open sea, and although they can be propelled with rhythmic movements of their umbrellas, they move basically at the mercy of the sea currents.

Jellyfish have survived for a long time in their aquatic habitats. They have been on Earth for millions of years and can be found in all oceans.

There are also some jellyfish that live in freshwater lakes and rivers. There are some species of hydrozoans that are only found in fresh water

Jellyfish usually float, however, occasionally you will see them swimming. Jellyfish swim by rhythmic pulsations of the umbrella or bell.

The movement is much like an umbrella slowly being opened and closed. It is coordinated by a very simple nervous system and by sense organs around the edge that are sensitive to light and chemicals in the water.

Jellyfish are slow swimmers, but speed and low water resistance are not important because they can also feed on plankton. It is more important to them that their movements create a current where water (which contains their food) and is being forced within reach of their tentacles.

Most jellyfish feed on small fish and zoo-plankton that get caught in their tentacles.

Jellyfish also eat small animals, such as shrimp. Some of the animals that jellyfish eat are microscopic, too small to be seen by the human eye.

They also eat other jellyfish of other species. They capture their prey using nematocysts, tiny structures present in the animal's tentacles.

Jellyfish reproduce sexually and asexually. Upon reaching adult size, they reproduce daily if they have enough food.

In most species, spawning is controlled by light, so that the entire population appears at about the same time of day, usually at dusk or dawn.

Jellyfish have both male and female individuals with occasional hermaphrodites. In most cases, the adults release sperm and eggs into the surrounding water, where the unprotected eggs are fertilized and mature into new organisms.

Most jellyfish live from a few weeks to several months, although some species can live a year or more.

Jellyfish reproduce sexually, which means that they produce gametes, or eggs and sperm.

The eggs are fertilized by the sperm and then released into the water, where each one becomes a free swimming larva called a planula.

Each planula eventually adheres to a rocky soil and develops into a polyp like stem. The polyp is an asexual stage and reproduces by budding.

Jellyfish polyps release many buds, and each one is released as a young form called an ephyra, which then moves away and matures into a jellyfish.

The complete life cycle can best be seen in the image below.

In the case of the box jellyfish, the polyp can only produce a single jellyfish. The alternation of a sexual and an asexual phase in the jellyfish life cycle is known as alternating generations.

Jellyfish burns are relatively common problems for people who swim or dive in the sea. Their long tentacles can inject venom using thousands of microscopic stings.

These bites vary greatly in severity. In most cases they cause immediate pain and red marks and skin irritation.

Some bites can cause systemic (body-wide) illness, and in rare cases jellyfish bites are potentially fatal.

Burning pain, red, brown or violet spots on the skin, itching, swelling and throbbing pain radiating from a leg or arm are the symptoms of a jellyfish burn.

What to do when you have a jellyfish burn

If the stinging cells [nematocysts] of a jellyfish come into contact with your skin, they will release a venom that can cause various symptoms, See the most common ones below.

Some types of jellyfish stings are like miniature harpoons with barbs at the end that inject venom to paralyze their prey. Some jellyfish have sticky harpoons, and others wrap their harpoons around their prey to trap it.