Hedgehog: Habits, Diet and Other Facts 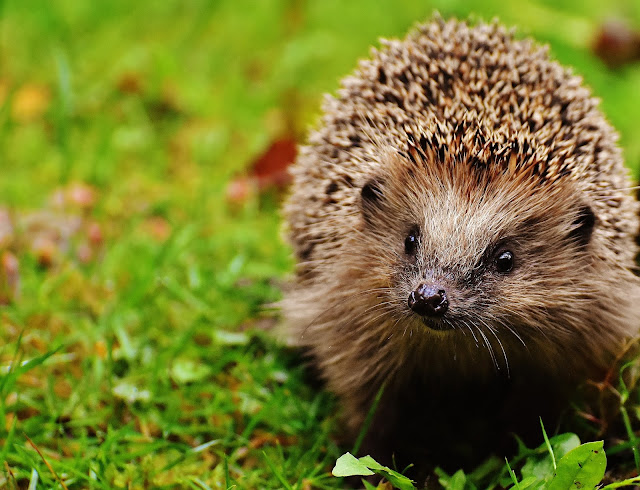 The hedgehog or terrestrial hedgehog (Brazilian Portuguese) or called by its scientific name: Erinaceus europaeus also called porcupine, hedgehog or simply hedgehog is a primitive insectivorous mammal of the Erinaceidae family, which includes 16 species. The hedgehog is only present on the European continent (native), being introduced in New Zealand. In Portugal it is an easy species to find in nature.

Hedgehogs are easily recognizable by their spines, which cover the entire body except the muzzle and belly. The hedgehog has about six thousand sharp spines of 2 to 3 centimeters, which cover the back and flanks of its body. The spines are modified hairs whose mobility is controlled by the muscles. The thorns are bristly, brown colored with more or less dark tones, but the belly hair is cream or whitish.

When it feels threatened, the hedgehog curls up on itself, hiding the exposed parts of its body, such as the belly, limbs and head, transforming itself into a “spiked ball”, which is very difficult to penetrate. The head is easily distinguished from the rest of the body, the eyes are large, the ears are relatively small and pointed, and it has a rudimentary tail.

There is no sexual dimorphism, that is, there are no obvious characteristics that differentiate males and females. However, the main difference is that males have intra-abdominal testicles and a well-developed penis, while females have a vagina close to the anus and have five pairs of nipples or teats: one pair in the pectoral area, two pairs in the abdominal area. and two pairs in the inguinal area. The length of the body varies between 20 and 35 centimeters and the tail between 10 and 20 centimeters. Adult animals weigh on average 700 grams, this value may vary between 400 and 1200 grams. An animal that does not have at least between 500 and 600 grams will have difficulty surviving the period of hibernation. Genetically they are diploid (2n) beings with 48 chromosomes. The average longevity is 3 years but they can live up to 10 years.

The hedgehog is distributed throughout most of Western and central Europe, including the British Isles, coastal and southern areas of Scandinavia, extending to Baltic countries such as Finland, Estonia and western parts of Karelia, Russia. Its eastern border reaches the western portion of Poland, Austria, Czech Republic and Slovenia. It can be found in almost the entire Iberian Peninsula. In the Mediterranean, it only occurs on the islands of Corsica (France), Sardinia and Sicily (Italy). 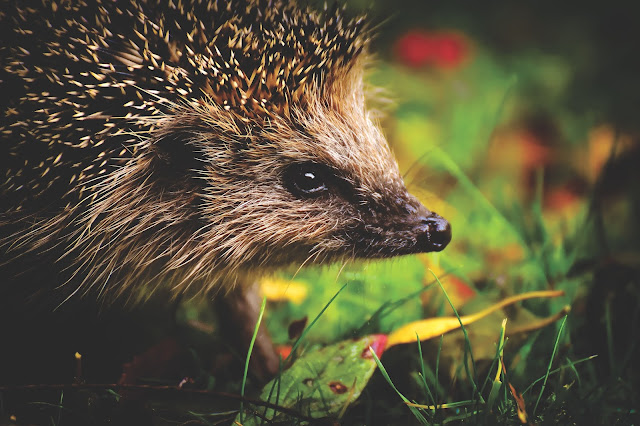 It does not occur in the Balearic Islands, Canary Islands, Cyprus, Madeira, Malta, Balkans or Greece. It was artificially introduced in some islands of the Azores, namely in São Miguel, Santa Maria, Terceira, São Jorge, Pico and Faial.

In the Iberian Peninsula, it has a wide range of natural environments, from open areas to more wooded areas, the latter being the most sought after by hedgehogs as it offers shelter and protection. In the Mediterranean area prefer wetter areas such as forests. They also inhabit semi-urban areas, such as gardens. 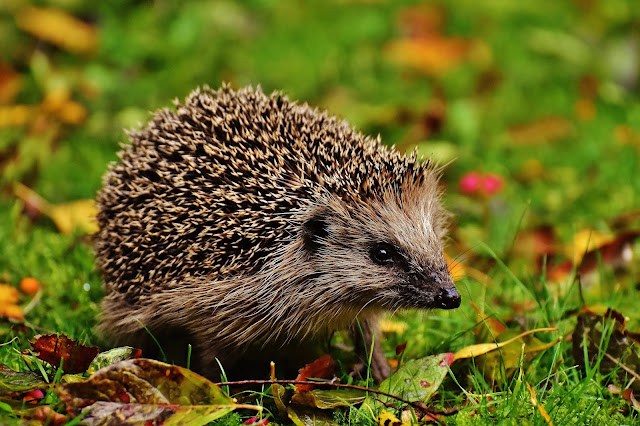 The hedgehog is an active animal, mainly at dusk and at night. Hedgehogs are insectivores, that is, their diet goes mainly through small insects. However, it also eats wild fruits, seeds, earthworms, snails, bird eggs (from nests that are built on the ground) or even small frogs and reptiles that it encounters along its way. Despite the small legs, the hedgehog can travel one to three kilometers in a night in search of food.

As it feeds in few portions and has a very high metabolic rate, hedgehogs also look for food during the day, especially females during the breastfeeding period and young ones, as they have greater energy needs.

They are not aggressive animals, but fights are recorded mainly between males, to establish dominance between them. They are nocturnal mammals and hibernate, using a burrow that they dig into the ground. Hedgehog hibernation normally occurs from November to March, with a high mortality rate in hedgehogs during the first hibernation.

Hedgehogs build burrows to hibernate and have their young. During the hottest months of the year, they take refuge in places with dense vegetation, often changing their shelter. In Portugal, hibernation takes place in hedgehogs that inhabit regions of high altitudes, such as Serra da Estrela and plateaus in the district of Bragança, where the cold is very accentuated. 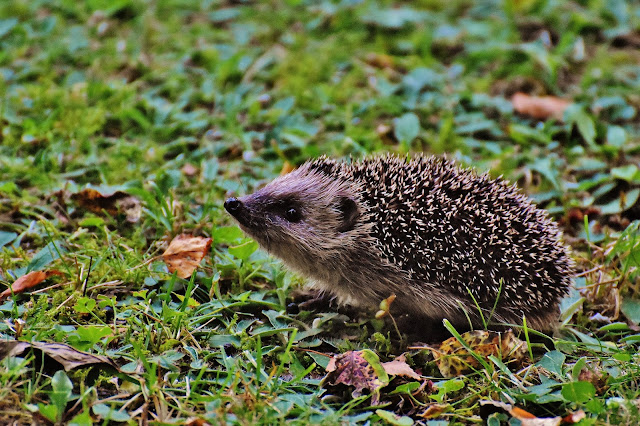 Because their bodies are covered in thorns, it's hard to think how hedgehogs reproduce. However, the thorns are maneuverable and, at the time of reproduction, when the male does a “dance” around the female, the female lowers the thorns so that the thorns lie flat on her body, allowing for mating.

In Portugal, hedgehogs can mate between January/February and August/September, and most of the time, they only mate once a year. The female builds a nest with feathers and straw where she will raise her litter alone.

The gestation period lasts 35 days, with 2 to 6 offspring being born. The offspring are born blind, white and with a relative weight of 10 to 25 g. Puppies are not born with sharp peaks and their body is wrapped in a thick gelatinous layer. In this way, at birth, the offspring do not harm the mother. But inside the thorns there is a liquid that, hours after birth, will dry up, causing them to quickly become bristly and strong. The opening of the eyes takes place after two weeks and the chicks start to leave the nest in the third week. Breastfeeding lasts about a month. After this period, the offspring feed without any help from the parents.

Up to the first year of life, mortality is quite high (up to 70%). After that year, the hedgehogs manage to live up to five years. Sexual maturity is reached in the first year of life. The chicks, from birth, curl up on themselves, as they are left alone in the nest by the mother who needs to feed. Although the chicks are more vulnerable, as their spines are less hard, predators are not the hedgehogs' main threat.

As they are relatively slow animals, they are one of the vertebrates most susceptible to being run over. In Portugal they are not a kind of risk. In other regions, for example, in the province of León (Spain) an average of 1.7 individuals per kilometer are run over. With regard to biotic relationships, there are records of the hedgehog being preyed on by Eagle Owl (Bubo bubo), foxes (Vulpes vulpes), badgers (Meles meles) and even dogs (Canis familiaris).

They are animals that have several pathologies, being parasitized by trematodes, nematodes, siphonaptera and mites, including some exclusive parasites, such as the trematode Brachylaemus erinacei and the flea Archaeopsylla erinacei.

The hedgehog is classified as a species with Least Concern (LC) conservation status according to the IUCN Red List.

Although their main threat is pedestrian accidents, they are not subject to any regressive trend and are relatively abundant in their distribution area. The hedgehog is one of the species that is listed in Appendix III of the Berne Convention. Occurs in several protected areas within its geographic area.

Traditionally, it has no particular economic interest for its use. In certain European regions they are animals sometimes chased by man, as they feed on the eggs of game birds that have a nest in the ground.
In the Basque Country and Portugal in the past it was a species captured for gastronomic purposes. Hedgehogs were considered a snack in southern Portugal, and the dish was called “serra piglet”. Currently, the capture of these wild animals is not allowed. As a general rule, today they have human esteem for their unique morphology and inoffensive nature. They are part of children's imagination, with characters common in literature (short stories) and children's programs in many countries.