Iguana: Habits, Diet and Other Facts 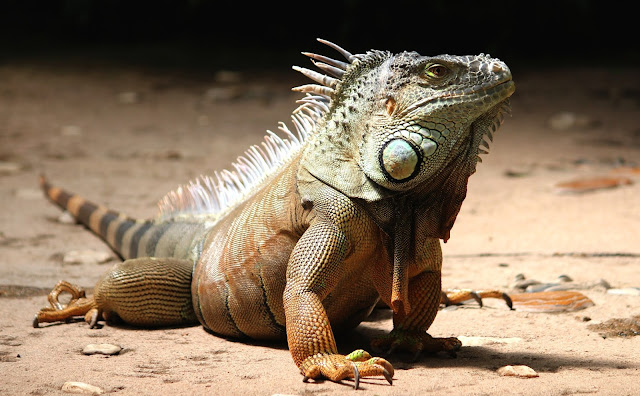 Iguana is the name given to a group of reptiles belonging to the Iguana genus of the Iguanidae family. The Iguanidae Family is made up of about 35 species, and in Brazil there is only one species, the Iguana iguana, which we will talk about in this text.

The iguana (Iguana iguana), also known as the green iguana, has a coloration that varies between green and brown and can measure about one meter and 80 centimeters in length. It has arboreal habits and is a herbivorous animal.

This species is widely traded as a pet. According to the Red List of Endangered Species of the International Union for the Conservation of Nature and Natural Resources (IUCN), the iguana is classified as of little concern, not presenting a great risk of extinction.

General Characteristics of the Iguana 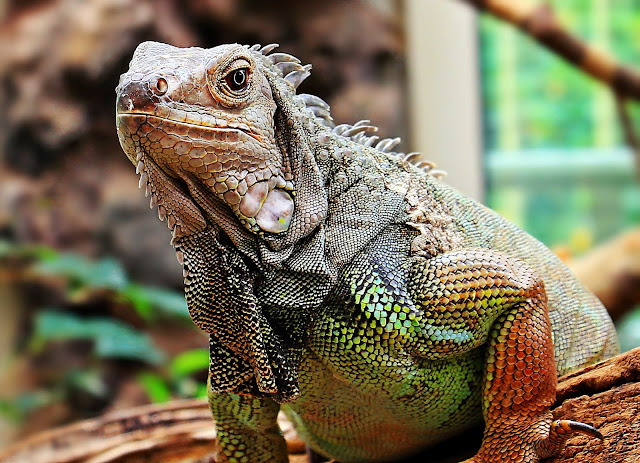 The iguana (Iguana iguana) is a reptile belonging to the Order Squamata, Family Iguanidae and Genus Iguana. It is found in the tropical and subtropical region of America, with a wide distribution throughout Brazil.

They have a diurnal and arboreal habit, being found in regions close to water bodies. Like other reptiles, iguanas need the sun and shade for their thermoregulation, finding a favorable environment in the trees. In addition, iguanas need ultraviolet (UV) rays for calcium and vitamin D metabolism.

Iguanas have a light green body in young individuals, which darkens as they become adults, acquiring a grayish-brown tone, and may also present dark vertical stripes. They can reach a meter and 80 centimeters in length, and their tail is up to two thirds of their length, and weigh about six kilos.

Iguanas also have some very peculiar characteristics, such as a crest that runs along the back and tail, similar to spines, a well-developed skin fold in the gular region and a large, rounded scale below the eardrum.

The iguana is a herbivorous animal, with food preferences not always related to the species most available for its food. These animals can be observed ingesting the remains of dead animals and even feces from members of the same species, however, this may be related to the maintenance of their microbial fauna, which helps in the digestion of plant matter, their main food. Ingestion of small animals, such as insects, can occur unintentionally.

The sexual maturity of iguanas occurs between two and three years of age. The reproductive cycle of this species is related to the rainy and dry seasons. Males generally establish breeding territories at the beginning of the dry season and females lay in the middle of the dry season. This is so that the eggs can hatch towards the beginning of the rainy season, when the leaves are young and easy to digest for the newborn chicks.

The amount of eggs laid by females varies according to body size, however, this amount is, on average, 35 eggs, and they take 10 to 15 weeks to hatch. During this period, females protect their nests from other females. Most puppies die before reaching adulthood. The juveniles are preyed on, for example, by alligators and fish when they swim away from their nests.

Curiosities about the iguana 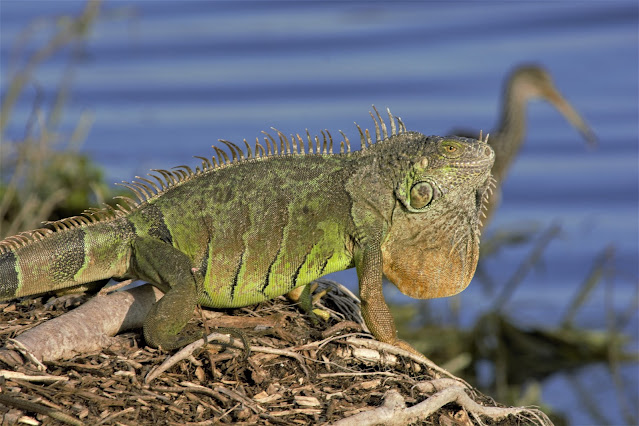 In some countries, the meat and eggs of iguanas are used in food, and their skin is also traded. Thus, in some places, such as Costa Rica and Panama, the iguana is at risk of extinction.

The iguana is an animal that has been widely sold as a pet. Thus, illegal capture for sale has been a threat to their populations.

Many people acquire the iguana as a pet. However, it is important to highlight that these animals require very special care for captive breeding. For their organism to function properly, it is necessary to have a terrarium with a heating system, controlled humidity (between 70% and 80%) and ultraviolet light, for the fixation of vitamin D in the animal's body. In addition, these animals can transmit diseases such as salmonellosis, so it is important to be careful with the maintenance of the terrarium, in addition to monitoring with a veterinarian. The acquisition of the iguana also requires certain care, as it is necessary to do it through breeding sites authorized by Ibama. It is also important to highlight that this species, when adult, becomes very large and can also be aggressive, which can make its creation difficult in places with restricted space.