Sloth: Habits, Diet and Other Facts 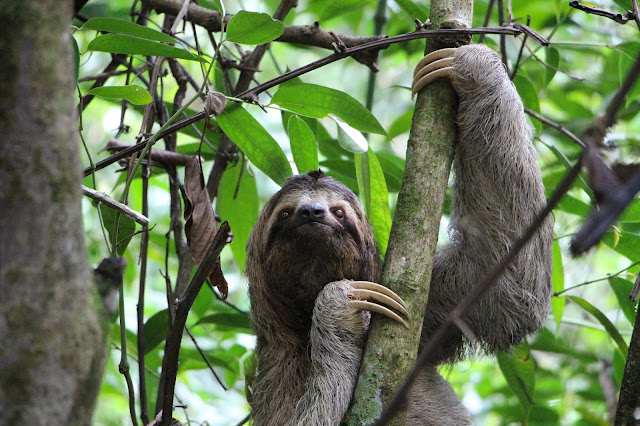 The sloth or simply sloth is an animal belonging to the phylum Chordata, class Mammalia, order Pilosa, the same as the anteater, and is distributed into two families, the Bradypodidae and the Megalonychidae. Sloth species are divided into two genera that differ basically by the number of fingers. 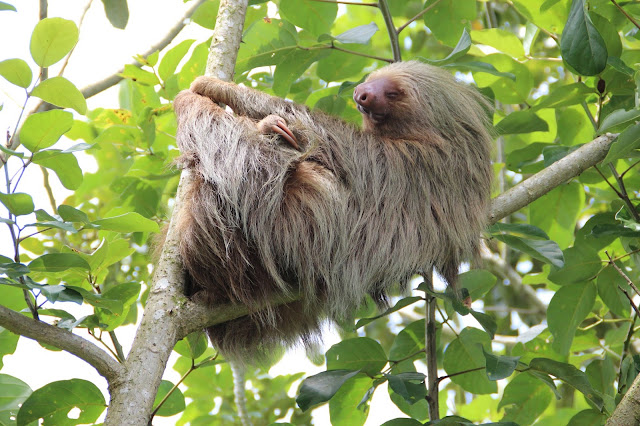 The sloth is an animal that inhabits from Central America to South America. Among its main characteristics, we can mention: 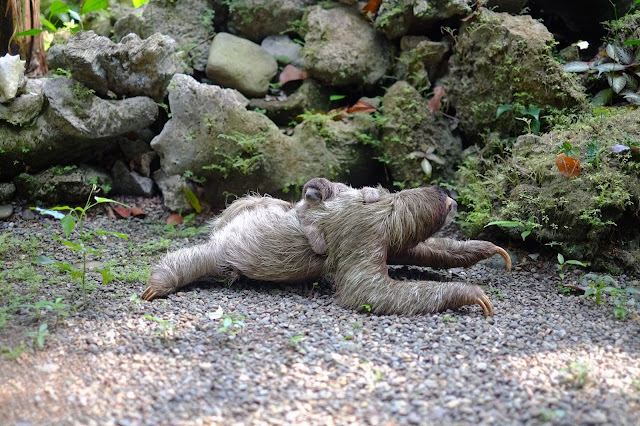 The sloth is a eutherium mammal, that is, placental. The sloth's gestation lasts about four to six months. The puppy, in the first week, begins to feed on leaves, however, breastfeeding can last up to four weeks. During this entire period, he lives clinging to his mother. After six months of life, the puppy is left by the mother and starts to live alone.

There are currently six species of sloth, as mentioned above. Among these six species, only one, the three-toed sloth (Bradypus pygmaeus), does not occur in Brazil. Below, we will mention some characteristics of these species. 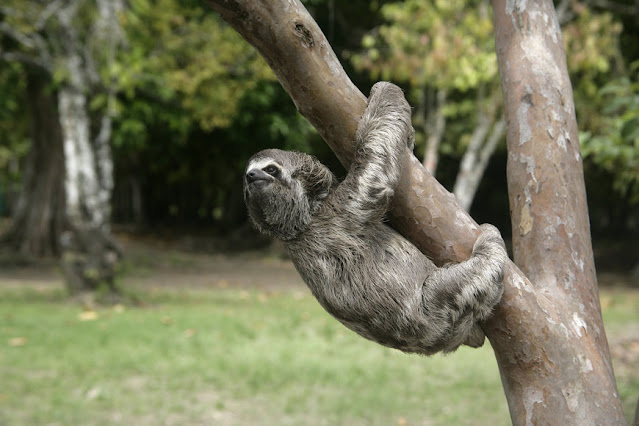 The common sloth is a species that inhabits forest regions, being found in countries such as Brazil, Peru, Venezuela, Nicaragua, among others. The common sloth measures about 60 cm and weighs around 4 kg.

Its body is covered by long, wavy, thick hair, except on the face, with a color that varies between light brown and yellowish, and may present with spots. It has a dark coat on the face like a mask. Males have shorter, darker hair and are covered with a yellowish coat on the back.

The common sloth has only one offspring in each gestation, which usually occurs at 19-month intervals. It is a very hunted animal and sold as food or even as a pet, mainly in the North and Northeast regions of Brazil and Colombia.

According to the Red List of Endangered Species of the International Union for the Conservation of Nature and Natural Resources (IUCN), the common sloth is classified as a situation of least concern. 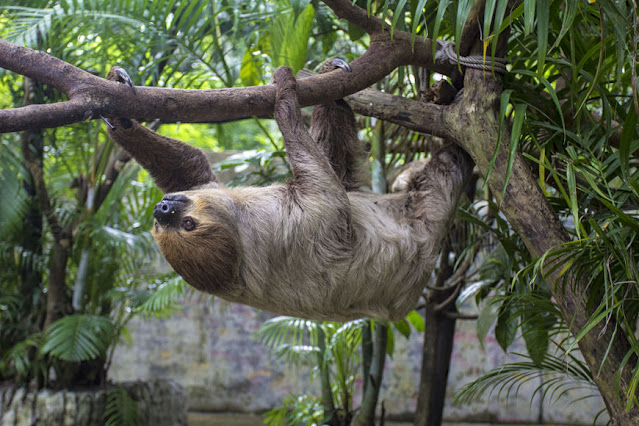 This is a native species of Brazil, endemic to the Atlantic Forest, found in Bahia, Espírito Santo, Sergipe and Rio de Janeiro. It lives mainly in humid tropical forest areas. The maned sloth can measure up to 75 cm and weigh up to 10 kg.

A feature that distinguishes it from other species is the dark color of its coat in the neck region, as if it were a collar, which extends to the back. The male, on the other hand, has a yellowish coloration on the back.

The maned sloth has only one pup per year and sexual maturity is reached between the second and third year of life. In nature, it can live for over 12 years.

This is the only species present in Brazil that is in a state of greater concern regarding its preservation. Mainly due to the destruction of its habitat, it has caused the decline of its populations. According to the IUCN Red List of Endangered Species, the maned sloth is classified as in a vulnerable situation. 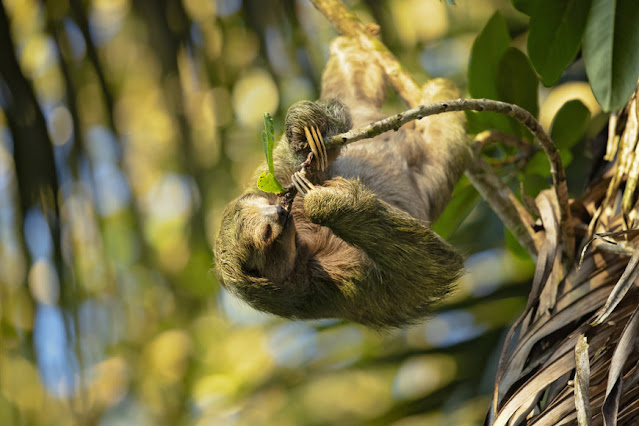 This species is found in tropical rainforests in countries such as Guyana and Suriname. In Brazil, it is found only in the North region. The Bentinho Sloth or Bentinho Sloth has a dark coat with black spots on the dorsal region, and a yellowish head and neck.

The male, on the other hand, has a coat in shades of orange and yellow, on the dorsal region, with a black central line. The Bentinho sloth reaches sexual maturity between the third and sixth year of life, and the female, like the other species, has only one offspring per pregnancy.

According to the IUCN Red List of Endangered Species, the Bentinho sloth is classified as being of least concern. 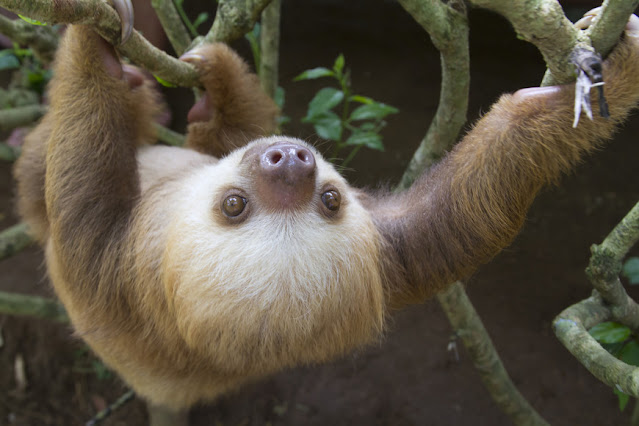 This is the only species of sloth that does not occur in Brazil, its occurrence is restricted to Isla Escudo de Veraguas, off the coast of Panama. The three-toed dwarf sloth inhabits both dense forest and mangrove regions. It has a greenish hue, due to the presence of algae, long hairs in the neck region and can weigh up to 3 kg.

According to the IUCN, there is no information about reproduction, lifespan, among other aspects of this animal's life. The fact of having a restricted range of habitat causes its population to be reduced. According to the IUCN Red List of Endangered Species, the three-toed dwarf sloth is classified as critically endangered.

This species inhabits regions of humid tropical forests in countries such as Brazil, Peru, Venezuela, Bolivia, among others. The Hoffmann sloth has a golden coat, is lighter on the face, and can weigh up to 8 kg. It feeds mainly on leaves, fruits and saps of some trees.

According to the IUCN Red List of Endangered Species, the hoffmann sloth is classified as being of least concern. 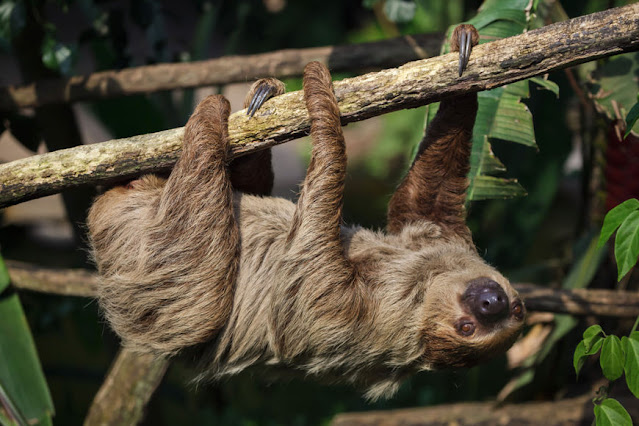 According to the IUCN Red List of Endangered Species, the King sloth is classified as being of least concern.