Hyena: Habits, Diet and Other Facts 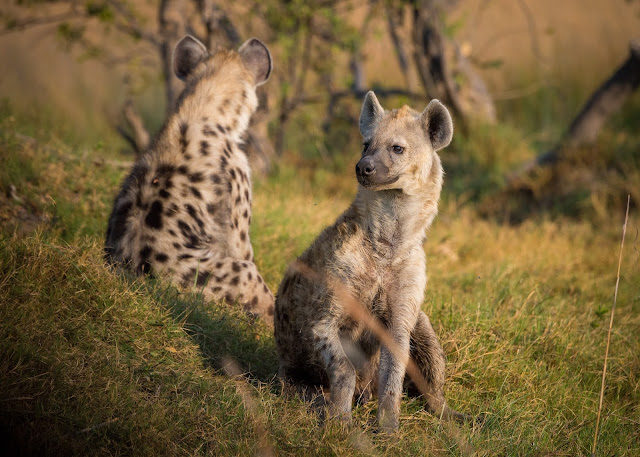 The spotted hyena (Crocuta crocuta) is the largest representative of the hyena family (Hyaenidae) and an adult female weighs from 70 to 90 kg, being up to 12% larger than the male specimens.

The spotted hyena lives in regions of the African savanna and is considered an extraordinary predator.Their reputation as scavengers is not deserved, as they are considered by some to be formidable hunters, chasing their prey at speeds of up to 40 mph and hunting in groups of up to 100 individuals. Because they have a relatively large heart, their vigor is equally remarkable, able to keep chasing prey for long periods. 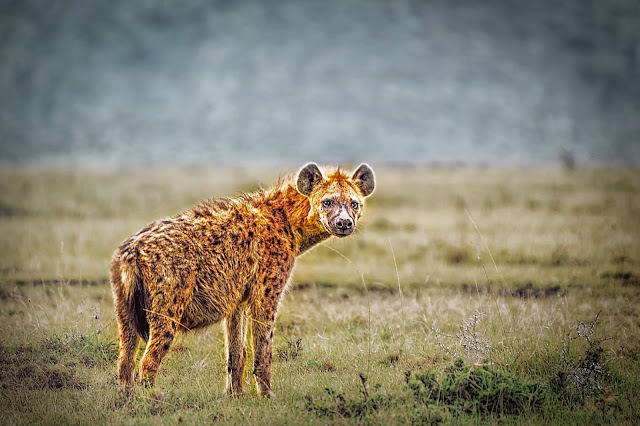 Spotted hyenas are the largest of the existing hyenas. Its coat is shorter than that of other species. Females are considerably larger than males, measuring up to 1.70 m in length and weighing an average of 80 kg. Spotted hyenas have black spots, as their name implies, they have a slightly higher front part of the body, thus giving to the most famous and well-known appearance in hyenas, their face resembles a lot a canine, and their ears are indeed rounded. 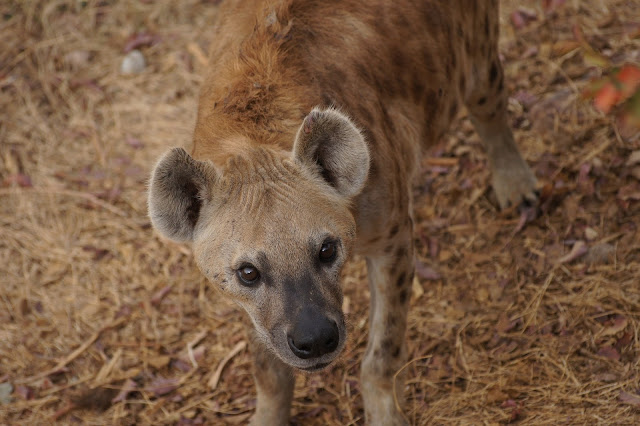 The rump is rounded rather than angled, which prevents attackers coming from behind from getting a firm grip on it. Spotted hyenas have a large heart, about 1% of their body weight, thus giving them extreme stamina in pursuit. In contrast the lion's heart is about 0.45% of its body weight.

Its mouth is made of super strong and sharp teeth, ideal for breaking bones and gnawing on horns and hooves. Combined with strong jaw muscles, which can generate some of the strongest bites in the animal kingdom, with around 565.7 newtons in the canine tip and 985.5 newtons in the butcher tooth (back teeth). One way to deduce a hyena's age is by looking at its teeth.

The Spotted Hyena is the most carnivorous member of the Hyaenidae family. Unlike its cousins, striped hyena and brown hyena, the spotted hyena is a predator, not a scavenger, this has been demonstrated since the 1960s. One of the first studies to demonstrate its hunting skills was done by Hans Kruuk , an African wildlife ecologist, and he has shown through a 7-year study of hyena populations in Africa that spotted hyenas hunt as much as lions, and with further studies this has been shown to be the average across all areas of Africa. . Yet spotted hyenas continue to be marked as scavengers, often even by ecologists and wildlife documentary channels.

The animals that hyenas hunt are very diverse, as they live in many different regions. Wildebeests are the most frequent prey of Spotted Hyenas in Ngorongoro and Serengeti. Thomson's Zebras and Gazelles come right down on the menu.

In addition to feeding on game, they also manage to obtain food by stealing from other animals, such as lionesses, leopards, cheetahs, wild animals, etc... They also feed on fruits, roots, eggs, fish, snakes and even urban waste and rural animals.

The largest known populations of Spotted Hyena occur in the Serengeti ecosystem in Tanzania (estimated at 7200 to 7700 individuals), in the Kruger National Park in South Africa (1300 to 3900) and in the Masai Mara National Reserve in the Kenya (about 500 to 1000). Several hundred individuals occur in conservation areas in Zimbabwe, the Selous Game Reserve in Tanzania and the Okavango region in Botswana. Spotted hyenas are considered by the IUCN to be a low-risk species in Botswana, Ethiopia, Guinea Bissau, Kenya, Namibia, South Africa, Tanzania and Zimbabwe. They are considered a threatened species in Benin, Burundi (where thought to be on the brink of extinction), Cameroon, Mali, Mauritania, Niger, Nigeria, Rwanda and Sierra Leone. They are extinct in Algeria and Lesotho. There is a lack of data on the number of spotted hyenas in Angola, Burkina Faso, Central African Republic, Chad, Democratic Republic of Congo, Côte d'Ivoire, Djibouti, Eritrea, Equatorial Guinea, Ghana, Guinea, Malawi, Mozambique, Senegal , Somalia, Sudan, Eswatini, Togo, Uganda and Zambia.

Spotted hyenas form a large group called a clan, with up to 80 members, with a record of up to 100 members. There is one member at the top of the command pyramid, it is a female, usually the largest and strongest, popularly known as the matriarch. Below the "queen" come other females, possibly cousins, sisters, and cubs. Finally come the males, who are about 20% smaller and much sweeter than the females.

The hunting behavior of the Spotted Hyenas is quite efficient, the clan is divided into small groups of 5-20 members, who will roam their territory looking for prey or patrolling, usually going out at night, as their vision is one of the best among all predators, coupled with excellent hearing, smell, stamina, communication, and intelligence, hyenas are almost likely to succeed in hunting.

The technique of chasing and attacking prey is a little varied and depends on the prey, for example, hyenas rarely ambush, they prefer to split the hunting group, where there will be a hyena chasing prey for a long time until the prey drops from fatigue, then the rest of the group that followed the chase further back, comes to reverse the attack. The hyena is famous for gutting its victims still alive, but it is a very common behavior among all predators, from wild dogs, wolves, bears, lions and birds of prey, but the hyena does this more easily, thus raising the percentage of success, because an animal that flees from an attack of such gravity made by hyenas, it is very likely that it will die, unlike an animal that escapes from a leopard attack that tries to strangle it, if the animal flees it is very likely that will survive.

It is also common for hyenas to hunt considerable animals alone, such as wildebeests, basically a hyena attaches itself to the animal, biting in the groin until it gets tired, as the hyena's bite is very strong and it would be difficult to escape from it. The tired animal would fall to the ground giving the hyena the opportunity to start devouring it still alive.

A very curious behavior of hyenas is that of defense, when a predator tries to steal their prey, or invades the place of their broods, the hyenas communicate through howling for miles, studies have revealed that a hyena in distress can call for more than help. 10 km away. As for the invader, the technique of solving the problem varies a lot, if it is wild boars, cheetahs and leopards, the hyenas group together and fiercely advance towards the invader, who will always run and rarely fight. The only animal that faces a hyena is the lion and even then it's not a guaranteed fight, because if the lion meets a group of hyenas they put up resistance until reinforcements arrive, but if it's just a lone hyena the lion will attack, yeah It is very common for lions and hyena to engage in bloody confrontation more than any other predators in the world. A very common technique seen in hyenas facing lions is when they band together and advance as a shock troops towards the lion, causing it to flee and if the lion attacks, the other hyenas will receive the attacker with strong bites, capable of breaking a leg. or lion bone and if the lion is trapped by hyenas it is very likely that it has an organ pierced by the strong hyena bite, it is no exaggeration, but a lion bitten by hyenas can suffer from a major infection.

Behavior with other species

The Spotted Hyena competes with all other major African predators for territory and food. In areas where lions and hyenas survive, there is always direct competition. Lions generally ignore hyenas unless they're in the middle of a kill.

It is generally said that hyenas steal from lionesses, but in fact lions most often steal from hyenas when they can, as hyenas can communicate with the rest of the clan even from miles away, thus calling in reinforcements to defend the hunting and driving out invaders. When hyenas discover lion hunting they usually stay within 30-100 meters of the hunt until the lions retreat, but in some cases they decide to attack and drive the lions out if they are 3 to 4 times greater in number. Attacks on other hunters are more frequent at night, when hyenas are most active.

Hyenas also compete with wild boars (Lycaon pictus), usually vying for carcasses and some prey. Normally, some combats don't actually cause injuries as if it were "hyena vs lion", but they cause scratches and little bleeding.

In some cases hyenas and wild boars can have peaceful encounters, in which they both share the carcasses without attacking each other.

Hyenas are also accompanied by jackals that usually follow them to catch some of the game. There are encounters between Spotted Hyenas and Brown Hyenas in Kalahari and they usually both compete for carcasses and usually Spotted Hyenas outperform the smaller brown ones and defend themselves by just growling and raising the hairs on the spine, but usually this doesn't make a big deal. fight as it would be a hyena and lion, that usually the lion kills the hyena out of pride. About 71% of hyena deaths are caused by lions and a large proportion are caused by hunting and poisoning. Even though spotted hyenas are considered to be at low risk of extinction, most of them are being killed and becoming extinct in some African countries.

The female's clitoris is similar to the male's penis. Therefore, for a long time, spotted hyenas were believed to be hermaphrodites. Gestation is usually about 110 days old, resulting in 1 or 2 dark brown offspring. Unlike the offspring of other mammals, hyenas are born with their eyes open, and their teeth are sharp like staples. There are cases of puppy hyenas causing each other injuries, causing an accidental death by infection, for a long time such isolated cases were confused as a custom of hyenas killing their siblings and as always it is another big common mistake made without research but by deduction .

Hyena's milk can be 12 times more nutritious than a cow's milk, forming young with great strength, it's no wonder hyenas have physical abilities in their favor if there wasn't a very good diet as puppies, these abilities can be listed as , strong bite, very strong teeth and bones, big heart, great eyesight and a very evolved brain.

Spotted hyenas can contract brucellosis, rinderpest, and anaplasmosis. They are vulnerable to Trypanosoma congolense, which is contracted through consumption of already infected herbivores, rather than through direct infection of tsetse flies. Adult hyenas in the Serengeti are known to have antibodies against rabies, canine herpes, canine Brucella, canine parvovirus, feline calici, leptospirosis, bovine Brucella, rinderpest and anaplasmosis.

Spotted Hyenas in Captivity and as Pets

Not commonly seen in zoos, those bred in captivity have always had the reputation of being easy to breed, but captive breeding is almost nil, as hyenas that end up in zoos are not studied and always share space with a member of the same sex.

Incredibly hyenas can be tamed if raised from an early age and reports that hyenas tamed by some shepherds are as sweet as a dog. In April 2004 the BBC described how a shepherd living in the small town of Qabri Bayah, about 50 kilometers from Jigjiga in Ethiopia, managed to use a male of the species as a guard dog for his flock.