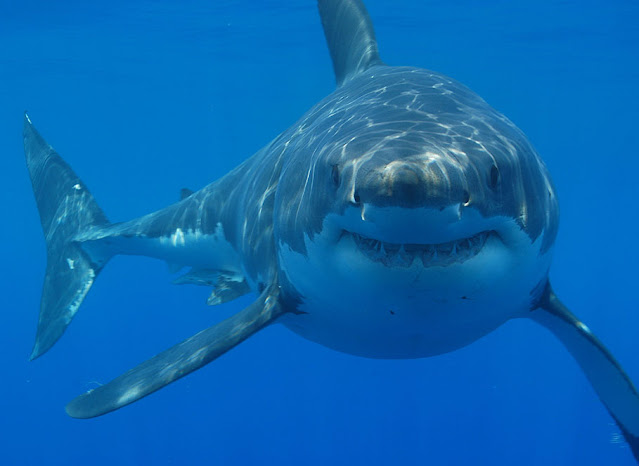 Considered the most ferocious predator in the oceans, the great white shark has aroused fear and admiration for at least 40 decades, since its famous portrayal in Hollywood cinema. However, its reputation as a 'man-eater' is far from the reality of this animal, which has no food preference for humans.

The white shark (Carcharodon carcharias) is one of the most famous species to inhabit the oceans around the globe, and populates the popular imagination due to its portrayal in several cinematographic works, among which 'Jaws', directed by Steven Spielberg, is the most famous.

This animal has a torpedo-shaped body, which facilitates its swimming, and can reach up to 6.5 meters in length, weighing about 3.4 tons. Among its morphological features are a pointed snout, large pectoral fins, a relatively tall triangular dorsal fin and homocercal caudal fin. The fins even act as important propellers for these animals, which can reach speeds of up to 24 km/h.

The great white shark has several rows of serrated teeth in its mouth (whose opening can reach up to 1.2 m), which even motivated the name of its genus: the word carcharos comes from the Greek and translates as rough/imperfect, while odon means teeth. These sharks have a grayish back and a whitish belly, and they detect compounds in the water thousands of kilometers away with the aid of the ampullae of Lorenzini. 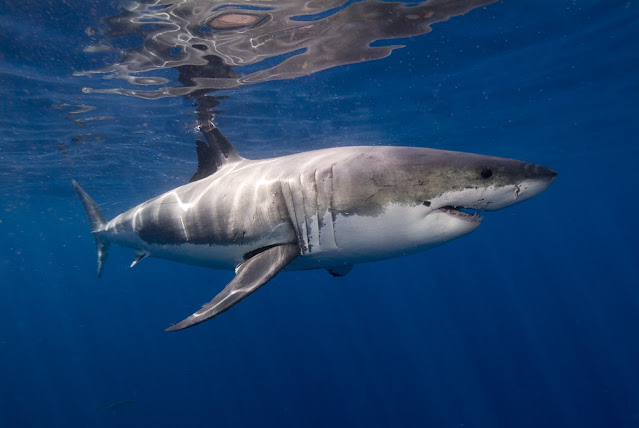 The white shark inhabits temperate and tropical regions, showing a preference for waters with a temperature between 12º and 24º Celsius. These animals are commonly seen in the Pacific and Atlantic oceans, between the coast of the United States and Mexico, also inhabiting southern Africa, the Mediterranean Sea, Japan and Oceania. In coastal and shelf regions, white sharks remain in shallow depths of up to 2 meters, but in the open sea they can reach depths of up to 1,200 meters. These fish perform long oceanic migrations when they become adults, migrating close to shore as juveniles. Usually solitary or seen in pairs, the white shark can form groups of up to 10 individuals, especially when feeding on carcasses. In groups, there is a social hierarchy: in terms of sex, females are superior to males; considering the size, larger individuals prevail over smaller ones; and, finally, in terms of residence time, older sharks prevail over younger ones. 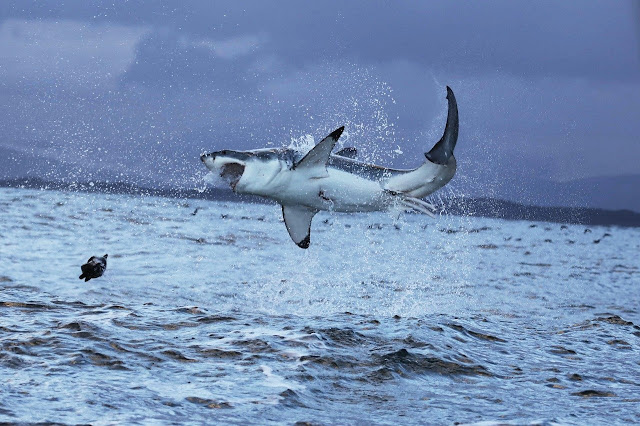 The great white shark is one of the top predators of marine food chains. These animals feed on fish, rays, turtles, octopus, crustaceans, dolphins, sea lions and seals, always opting for prey with a high fat content. Their keen sense of smell (i.e. ampullae of Lorenzini) and hearing are able to detect sick and injured prey over long distances, helping to control the spread of disease in the ocean.

The great white shark has different hunting strategies according to the size of the target species, among which the most common consists of swimming below the prey, climbing at high speed until it gets close enough to bite it. After the bite, the shark observes the victim's bleeding, feeding on it after its death. Regarding the attacks on humans, these are probably caused by a confusion between the shark and the prey; thus, these fish bite humans as a form of testing (in English, test bite or sampling bite) and, after realizing that it is not their usual food, they usually stop the attack.

Of slow growth, low fecundity and relatively late maturation (males at 6 years of age; female between 14-16 years), the great white shark is an ovoviviparous species (ie fertilized eggs develop inside the maternal body), and has low number of chicks (between 2-10) per breeding season. These animals show sexual dimorphism, with females being larger up to 2 meters in length compared to males, and there is no evidence of parental care. During copulation, the male may give light bites to the female, leaving marks on the flanks, back and pectoral fins. The eggs are fertilized inside the female's body, through the release of sperm by the clasper (male sex organ), and the newborns feed on unfertilized eggs.

With the exception of orcas and humans, there are no natural predators for the white shark. However, this species is classified as vulnerable by the IUCN, due to exploratory overfishing (aiming to commercialize its fins, meat and oil) and bycatch (i.e. bycatch). The jaws and teeth of these animals are also highly valued by the market, selling for up to $50,000. The great white shark has also been a target of recreational fishing, due to its size and the danger it offers, which has made it synonymous with status for competitors who aim to capture it.

Although some countries, such as the United States, South Africa, Namibia, Malta and Australia, have introduced measures to assist in the conservation of this species, its image in the eyes of the human population makes their implementation difficult. Currently, ecotourism and diving have stood out as an educational and profit tool in relation to this species, but their populations are still at great risk of collapsing.